Requirements for Protection of Endangered Species

The Golden Sun Moth is listed as critically endangered and loss of more than 0.5ha of its specific habitat requires referral as a matter of National Environmental Significance under the Environment Protection and Biodiversity Conservation Act 1999 (Cth). Both the natural temperate grassland habitat and the Golden Sun Moth are protected under Commonwealth and ACT legislation as they are critically endangered.

The Golden Sun Moth has a long and successful historical presence in Yarralumla on the site between Dudley Street and Denman Street. Surveys found them in considerable numbers in 2009 and again on survey in 2011 (Rowell 2013).  Surveys in 2013 (Umwelt 2014) confirmed 1.5ha of natural temperate grassland and 5 ha of golden sun moth.  The grassland and sun moth population are considered to be viable in the medium term.

The habitat for the critically endangered Golden Sun Moth Its specific habitat is native grasslands and grassy woodlands containing wallaby grass (Austrodanthonia spp.), speargrass (Austrostipa spp.), and Bothriochloa, as well as in degraded grasslands dominated by the exotic Chilean needlegrass (Nassella nessiana). The Natural Temperate Grassland between Denman and Dudley Streets is dominated by Austrostipa (Speargrass) and Austrodanthonia (Wallaby Grass).

The Golden Sun Moth is a medium-sized, day-flying (diurnal) moth. Females have a wing-span of 31 mm; the male's wingspan is 34 mm. The female has a reduced hind-wing and is a very poor flyer. The female's upperside of the fore-wing is dark grey, patterned with paler grey, and the hindwing is bright orange with black spots near the edge. The undersides of both wings is white with small black spots near the edges. The male's upperside of the fore-wing is dark brown, patterned with pale grey, and the hind-wing is bronzy-brown with dark brown patches. The undersides of both wings is pale grey with dark brown spots. Both males and females have clubbed antennae. Functional mouthparts are lacking in both sexes. The immature stages have not been described.

The Golden Sun Moth occurs in Natural Temperate Grasslands and grassy Box-Gum Woodlands in which the ground layer is dominated by wallaby grasses Austrodanthonia spp.

Grasslands dominated by wallaby grasses are typically low and open - the bare ground between the tussocks is thought to be an important microhabitat feature for the Golden Sun Moth, as it is typically these areas on which the females are observed displaying to attract males.

Adults are short-lived (one to four days) and do not feed - having no functional mouthparts; the larvae are thought to feed exclusively on the roots of wallaby grasses.

Males spend their entire adult life patrolling the grassland in search of females; once mated, the females spend their time laying eggs at the bases of wallaby grass tussocks.

Females have reduced hind wings and are reluctant to fly, even when disturbed, though males are capable of active and prolonged flight. However, males will not fly long distances (no greater than 100 m) away from areas of suitable habitat. Thus, populations separated by distances of greater than 200 m can be considered effectively isolated and populations which have gone extinct, or vacant patches of suitable habitat, are highly unlikely to be recolonised.

The flight period is relatively short, typically lasting from six to eight weeks (during November and December in the ACT region, possibly earlier or later in other regions). Males fly only in bright sunshine during the warmest part of the day (1000 - 1400 hrs). Adults emerge continuously throughout the flying season.

Larvae feed on the roots of the wallaby grass plant. The larval development time (and thus generation time) is unknown - it possibly varies between one and three years.

The Golden Sun Moth is sensitive to development activities that result in loss of habitat due to its limited dispersal ability; specific floristic and structural habitat requirements; isolated and fragmented distribution; seasonal lifecycle (making it cryptic for many months of the year) and; short adult lifespan and limited mobility of the females. 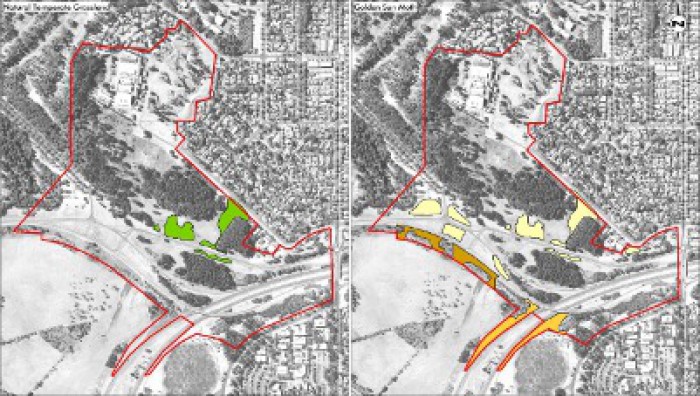 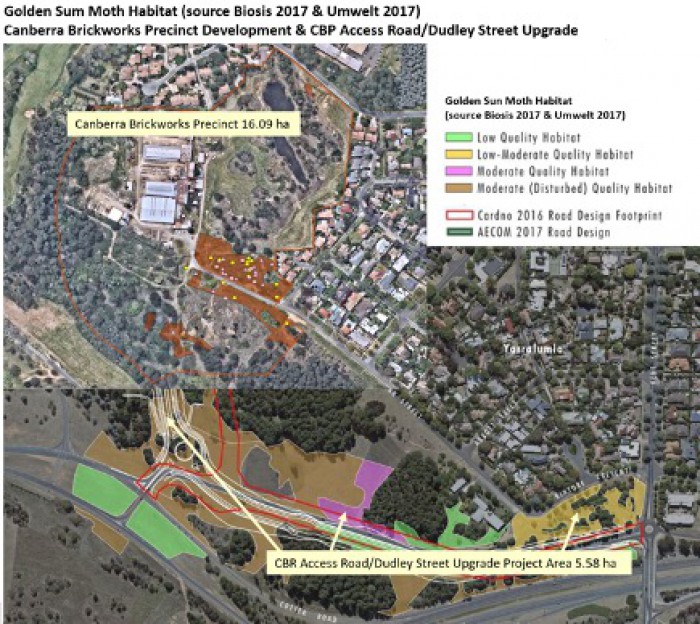 Such loss of biodiversity is inconsistent with the National Capital Plan Policies and Standards’ for Environment and the ACT Spatial Plan 2004 principles. The development will require consideration under the Australian Capital Territory Nature Conservation Act 1980 and referral and assessment under the EPBC Act as it will result in the loss of listed habitat.

The development proposals are that the elimination of the natural temperate grassland and the golden sum moth habitat be offset by “contributing to the improvement of [other] existing high quality natural temperate grassland and golden sum moth habitat”.  However, the report by Umwelt (2014) notes that “the current management regime would not appear to be consistent with biodiversity conservation objectives for the golden sun moth”.  Ecological guidelines for Fuel and Fire Management Operations state that for the golden sun moth “(PLAN25.1) Where possible, slashing in GSM habitat should be minimised between Nov and Jan to avoid the adult flying season” and “(OPS 25.2) Slashing in GSM habitat should not be undertaken below 10cm.”  Umwelt reported that slashing occurred mid-way through the 2013 survey in November. Given this, the use of offsets for increased protection of the golden sun moth would at best be highly doubtful.